Digital Humanities (DH) projects are often interdisciplinary and require the help individuals from a variety of backgrounds. Perhaps the most important people for these projects are librarians. At my university, I am lucky in that there is an entire DH initiative based out of the College of Humanities and Social Sciences as well as the library. Many of the staff members who train us in DH methods and advise our projects work directly for the library. They have also served as excellent liaisons between students and the wide variety of library services that are often hidden.

My dissertation incorporates a large DH digital mapping component. I’m tracking the locations of German prisoner of war camps in the USSR from 1941-1956 as a way to make a large-scale economic argument about the long-lasting detainment of the German POWs after the end of the war in 1945. One stage of the mapping process that I’m about to undertake is layering the locations of the camps over Soviet produced economic geography maps from the 1940s to discuss POW contribution to various sectors of the economy. To do this, I must do a process called georeferencing. I take a scanned map and line up points (such as cities, or tracing rivers and coastlines) from it with my base-map in the mapping software. Before I can do the process, though, I needed to get high quality scans of the Soviet maps.

Based in the library, we have weekly drop-in hours for DH. People can come it and consult others in the room for help with their projects. In my case, I’m working with a GIS librarian, as well as a CLIR Fellow in Data Visualization who also has a GIS background. When discussing the georeferencing task with them, they introduced me to the library’s chief digitization specialist. She invited me on a trip to the library’s offsite storage location, where the digitization department is based for space concerns. The staff helped me scan a series of maps on special, face-up scanners at a very high quality. One issue with my map sources is that they are quite often large, fold out maps bound into thick books. These types of sources would be extremely difficult to scan on a traditional copy machine scanner like I have access to in my department. The library’s digitization scanners were face-up and had a special platform specifically for bound books that allowed the two sides of the spine to be at different levels to create a flat surface under the glass scanner face. The scanning specialist also saved the scans for me in the highest quality resolution, which is necessary to zoom in and do all the tracing and lining up of points more accurately.

In addition to doing my scanning work, I was allowed to wander through the library’s offsite book storage. Not all university libraries keep all their books on the shelves of the library. As they acquire more books, older, rarely used books are taken to offsite storage areas. Many of my good book finds have been from seeing what was on the shelf near a different book that I found through a catalog search. This, unfortunately, is not possible with offsite books. However, the offsite librarians gave me free reign to wander around the offsite stacks. I searched in a few sections for the books that I use (generally Library of Congress DK books) to see if I had been missing any useful, older books.

Walking through the stacks, I felt like I was living out the archive scene from GoldenEye. I was super giddy to get to see the library technology and storage facilities, and the library staff was equally excited to show off their wares and help a lowly grad-student with her research. Make friends with the librarians. They will make your research life much less stressful, and you might get to take a fieldtrip to a cool school-based location.

It’s a new year and I’ve got a cool HASTAC Fellowship, so I’ve decided to add a blog component to my website to occasionally write about cool stuff related to my research, digital humanities, and mapping. I’ll be kicking this all off with a somewhat personal post. Those who have followed my personal travel blog from Russia might know of my brush with fate and how I was able to reconnect with part of my family that we hadn’t really been in contact with since my grandmother, her sisters, and her parents were evacuated by the British during the Russian Civil War. At least one member of my grandmother’s mother’s family remained in Simferopol, Crimea, and became a known Soviet poet, one who was the first to witness and write about the Holocaust. There’s actually a fantastic book written about him. I last saw his daughter in Moscow in July and again in October of 2017.

After my grandmother, her parents, and her sister came to America, my great-uncle was born. He passed away about a year ago and my father brought us some of the pictures and letters, which he had kept from his parents. It seems that my grandmother’s father’s family remained around present-day Ukraine. Some stayed in Kiev, others in Berdichev. Being a historian and the only living member of the family that speaks Russian, I was intrigued to look at the photos and letters. However, it soon became apparent that my knowledge of the history would become depressing.

One of the items that was most shocking was a photograph of the extended family. The bottom of the photo has a caption saying that Isaac was killed at the factory. The back of the photo, though, was much more troubling. It says that it was taken in Berdichev in 1923. Upon reading that, I immediately had a pit in my stomach. Berdichev was one of the major sites of the Holocaust, where the majority of the city’s Jewish population was exterminated. It is highly likely that all of those pictured perished. 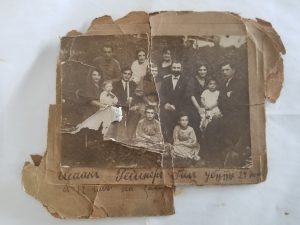 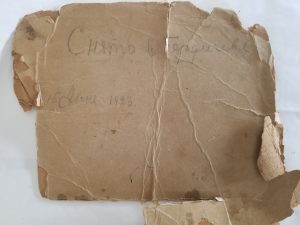 A subsequent letter from 1948 between my great-grandparents and one relative from Kiev alludes to the toughness of the war. The author, Inda, notes that she had received a letter two years before, and only just found the time to write back. She states that her family was doing much better after the war, but that “it is painful to write about the others” and that “due to the officer beasts, many in the family perished.” Most in the Western world don’t understand the toll of the Second World War on the Soviet Union. 27 million Soviet citizens perished during the war, 2 million of whom were Jews in the Holocaust. It is not an exaggeration to say that every Soviet family was touched by the war and lost at least one person. While I had suspected some of this, I had never known the extent. Indeed, my own extended family suffered losses during the war. 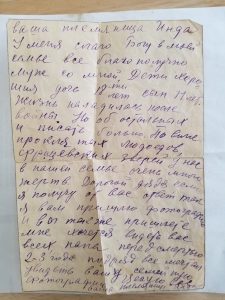 This brings me to my connection between my personal life and my research. For the past few years, I have worked as a teaching assistant for a course on genocide and weapons of mass destruction. One year, we read Father Patrick DesBois’s The Holocaust By Bullets, which chronicles the Holocaust in Eastern Europe, primarily in the territory of the Soviet Union, beyond the major deathcamps such as Auschwitz or Treblinka. Unlike at those camps, where killing was mechanized and impersonal, the vast majority of the executions in Soviet territories was by cruder, personal means such as shootings. Berdichev was one of these sites. While using Father DesBois’s book, I found out about his interactive mapping project, as I was embarking upon my own work with German prisoner of war camps. I consider Father DesBois’s map of the Holocaust by Bullets to be one of the best interactive mapping projects I have ever come across. In addition to plotting the extermination sites, each location features information from relevant archival sources, either German or Soviet, as well as testimonies from those who remained. Anyone interested in historical GIS, digital humanities, the Holocaust, or the history of World War II should know of this resource. This mapping project quickly and easily conveys the magnitude of the exterminations. It also readily illustrates the human toll of the Second World War on the Eastern Front. More work of a similar nature should be done to visualize the economic and human destruction of the Second World War.